Back in the early 90’s Jeep scored a big hit with the launch of the Grand Cherokee. Originally intended as a replacement for their incredibly popular Cherokee, the larger dimensions (and engine options) meant that the car developed into a larger rival to the recently launched Ford Explorer. Sticking to the monocoque design used in the Cherokee (and indeed most of today’s car-based SUV’s), the Grand proved very successful, with its Jeep heritage and classy design making it popular amongst wealthier customers; when the car was launched in the UK in 1994 the car was the only real rival for the Range Rover in terms of desirability and sophistication and was a relative success, despite the poor diesel option.

The second generation’s launch in 1999 saw a more mainstream shift in the design, although maybe more down to the fact that rivals were catching up in terms of premium features and car-like handling. Customers were not put off though and the Grand Cherokee continued to sell well to the many buyers who were won over by its softer styling and high equipment tally. European markets were offered 2 diesel options; originally a 3.1TD which was slow and thirsty, but from 2001 Chrysler/Jeep’s partnership with Mercedes meant that the solid 2.7 5cyl diesel engine from its ML found its way into the car, with decent fuel returns. Although by this stage the Grand Cherokee had turned into a Discovery rival (as opposed to a luxury Range Rover one), it still remains an attractive option and is available at pretty reasonable prices. However the interior is already very dated and dimensions inside match more small SUV’s than its exterior size suggests. 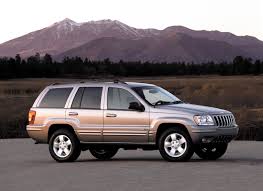 Instead I am considering getting the 2005-10 model…which to many people represents the low point of the Grand Cherokee’s lifecycle. The aesthetics of the exterior had been sharpened up significantly and to me they are a winner on almost every front except one, the horrific front headlamps whose curved design seem at odds to the entire rest of the car. Inside the car it gets worse; the design itself is pretty safe and inoffensive, but the material choices are akin to those from a early 00’s Korean hatchback and not a luxury SUV. Scratchy plastics and fake wood are only saved slightly by hints of chrome, and when specified a sat nav system which replaces the fiddly radio and is apparently pretty decent.

Equipment levels in the popular Limited trim are good however, with heated leather seats, cruise and climate control all coming as standard…and practicality is not half bad, with a usable rear bench and large boot meaning that for families at least, the Grand Cherokee still holds strong appeal. But for me the best aspect is under the bonnet; the new Mercedes Benz engine which is also found in many of the other cars I have reviewed (CLS, R Class, ML). Powerful and refined, the engine gives the Jeep a good turn of speed, but the 5 speed gearbox means that only 27.7 mpg combined is achievable, compared to over 30 in the larger R Class with its 7 speed transmission. 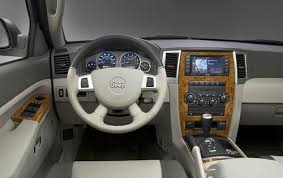 So would I buy a Grand Cherokee? Well I would not rule it out…a Mercedes SUV with this engine would come to at least £3k more, and whilst they are better cars they are also out of my price range. The interior and headlamp design are the only 2 areas where I have strong opposition to the Jeep, and many owner reviews are very positive, but I am a bit of a brand snob and so am more interested (at the moment) in other choices.

3 responses to “Big Chief on Campus”