Predicting what modern cars will become future classics is a tricky business, the vast majority of regular cars today are so mass produced that even the most obscure cars seem to have a decent production run. Rust-proofing, improved reliability and a steady supply of parts mean that the vehicles of the late 90’s and 00’s could theoretically be around for many decades to come. The reality though can be a little more shocking…previously popular models from the 1980’s are becoming scarce very quickly and even the likes of the original Ford Mondeo are going from minicab fodder to Coke can as scrap metal values rise and electrics rather than mechanicals begin to fail. The vast road tax hikes of post 2001 models also mean that many larger engined cars are simply too expensive to run legally; £500 a year is simply too much to pay on a car that is worth under a few grand. 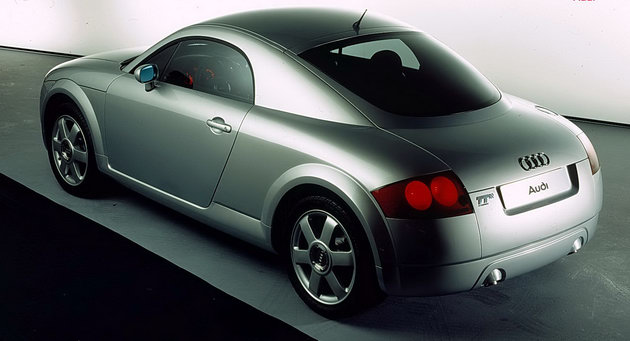 The TT concept looked very similar to the production model

The term modern classic is one used abit too often in the motoring press, but it may well be these cars which are spared the chopping block and solider on in the hands of enthusiasts. Vehicles like the original Ford KA and BMW M-Coupe may have stood out when origially launched, but an interesting shape and/or driving experience is likely to play an important factor on whether people take interest in the car and a loyalty commences. One car which is often cited as possessing such qualities is the original Audi TT, whose styling (inside and out) near single handedly relaunched the Audi brand as a premium competitor in the minds of the general public. Although I have not always been a fan of the TT, it is now a car that resides in my future dream garage (as a weekend classic) and in fact one that tempts me now too.

Originally previewed in 1995 as a concept car, the TT was launched in 1998 as a coupe model with the convertible following a few years later. At the time Audi was just beginning to pull out of a decade long slump after a series of scandals in the US damaged it’s image and profits on a global scale. But with the launch of the new aluminium bodied A8 and sharply styled A4 and A6 models it was clear that the Germans were on a mission to gain back some market share. The TT was crucial to this, as a sport coupe is a surefire way to ensure a boost in image amongst buyers, even if they don’t end up providing loads of profit. A striking bahaus-inspired body definitely got the TT noticed by buyers looking for a car which stood out from the crowd; the bold curves and simple lines gave the design a timeless feel, especially in the car’s usual silver colour and with 6-spoke alloy wheels. Even without Audi’s current gaping grille and trademark LED lights the TT still looks like a thoroughly modern car, so much so that it appears to have worn better than it’s successor (which was very similar externally except with the aforementioned design details added). Inside things were almost as good too, with aluminium detailing and quality controls giving buyers further cause for praise. Obviously the car cannot offer modern luxuries such as sat nav and phone connectivity, but the basics are there and the ‘strut’ design of the centre console (where it connects at the gear lever) is something that has become popular amongst many vehicles, especially in the Volkswagen Group’s portfolio.

An expected negative of that sleek shape is the complete lack of headroom for rear passengers, who get tiny rear chairs in the coupe version. The convertible ditched these altogether, but does not share the coupe’s classic lines to the same degree. A more worrying side effect of the shape were the safety issues that plagued the early TT’s. Several deaths seemingly caused by a lack of high-speed stability meant that a recall was needed and all cars were fitted with a rear spoiler and revised suspension; the spoiler does ‘spoil’ the lines of the design a little but I guess it’s better than ending up as part of the central reservation. Probably the most major issue that future classic buyers are likely to have with the TT are it’s relatively humble underpinnings…well in fact very humble seeing as that they are based on the underwhelming Mk IV Golf. This platform combined with the (optional) heavy Quattro system meant that sharp handling was not an attribute of Audi’s coupe, and with a 1.8 Turbo petrol as the only engine choice until 2003 when a 3.2 V6 was added and gave a healthy does of performance. The benefit of this platform is that parts are not extortionately priced, and in the smaller engine at least it returns decent fuel economy (sparing it from the highest tax costs), but in all honesty the car’s design means that it is a shue-in for classic status.

the convertible lost some of the flowing lines of the coupe

The best bit about the TT is that it’s widespread popularity means that examples can be had for relatively little…£5k will buy a tidy 2005 car with a good level of equipment, with plenty of scope below in terms of price. The TT is by no means a hairdresser’s car despite what some people may say, and is a good bet for anyone looking for a stylish and relatively practical coupe for not much dollar.

the 2nd gen car…attractive but a classic?