It seems I’ve reached a landmark post in this blog and whilst anyone who reads this blog more than once may have expected me to be writing something about cars, I’ve decided to be a bit more solemn and write a post that I have been intending to do for a while but had not got around to.

Although I’ve watched every episode of the fourth series of Glee I have been abit underwhelmed with the mix of new characters and the decision to split the action between New York and Lima; so much so that after reviewing the 3rd and 4th last episodes (which were abit too serious for my liking) that it took me until now to finish off series 4…something I had intended to do this week anyway, but given recent events I decided to watch them last night. Before I comment on Cory Monteith’s sudden death I’ll try and focus on the episodes in question first…

Wonder-ful is an episode which revolves around the music of Stevie Wonder, something which personally didn’t appeal to me and indeed the majority of songs I recognised were from the CD that is on repeat at work (which should tell you something about the audience of Stevie’s music). To be honest although the episode had some moving moments it was hard to care about many of the storylines; maybe a result of the long gap between me last watching Glee, but still. I wish that more had been made about Katey Sagal’s guest role as Artie’s mother…she is one of those actresses I really enjoy watching (or listening to in the case of Futurama), and I wish that more of her comedy could have been allowed to flourish. Her appearance also made me think of her sitcom ‘8 Simple Rules’, especially seeing as though the main star John Ritter died during filming… . It was nice to see Mercedes and Mike back to spur the new gang of people on, but Mercedes was as preachy as ever and her record contract plotline served only to reiterate the ‘be true to yourself’ mantra that Glee is so in-your-face about. One thing that didn’t sit quite right with me was the reappearance of Kate Hudson as Cassie July, as as much fun as it has been to watch her tear the increasingly annoying Rachel to shreds, the turn around seemed pretty random and seemingly there to allow Hudson to leave the role as a ‘good guy’. Maybe most poignant was the fact that Kurt’s dad’s cancer has gone into remission. The emotional topic of the scene aside, it was quite sad to witness a scene which undoubtedly would have included Finn if Cory Monteith had not checked into rehab just before these last 2 episodes started filming; watching it I realised that the next scene with these characters in will have to deal with a real life death rather than pretend joy.

By the time I got around to watching ‘All or Nothing’ I was pretty happy for the focus to be moved onto Brittany’s ludicrous genius and acceptance at MIT. It is a massive shame that the character of Brittany will be leaving next season as she provides a hilarious innocence/randomness to proceedings which could well be needed more than ever in future episodes. The Fondue for Two rubbish I could do without, but it did manage to bring back Sue Sylvester and Santana to the episode, and the more of them the better. Blaine’s decision to propose to Kurt was also silly but for other reasons – I get that the show is meant to be all about equality and stuff but Blaine’s character seems to have turned stupid over this season, and the old lesbian couple was funny at first but quickly wore thin with me. Thankfully they finished the stupid ‘catfishing’ plot, and as expected it was Wade/Unique who was the one posing as a girl in order to talk to Ryder…resultantly Ryder decides to leave New Directions but I don’t expect for a minute that he actually will; I mean for starters the actor is dating the girl that plays Marley in real life so he won’t be leaving and I expect that the group will get him back for Nationals. On the topic of Nationals and competitions, I genuinely thought that this episode was focusing on a National-level win for the Glee Club. I know that this season is going to be spread out over the next few episodes of season 5, but it now seems that it might be even longer as they seemingly have loads of preparation to do for the next round of competition? Regardless (and SPOILER ALERT), they won and did the whole group hug/celebration thing at the end, with Blaine left holding an engagement ring behind his back and Rachel waiting to hear back from her audition. It was really sad to hear Brittany’s monologue about how the Glee club were all like her family, especially given the fact it was her last episode and even more so now with the news about Cory Monteith.

Watching these episodes would have been a whole lot harder had the character of Finn made an appearance, when I last wrote about Glee he had not even entered rehab and he had subsequently left it and gone on to prepare for his upcoming wedding to Lea Michele (the actress that plays Rachel) and filming Glee Season 5. The explanation that Finn was away at teacher training college just about covered his lack of presence in these last two episodes, but quite what they will do when Glee returns in a couple of months time I cannot imagine. Hopefully it doesn’t seem morbid to speculate on possible exit storylines for somebody who died quite so recently, but whatever happens it will have to be very tasteful…that’s if they even continue with the programme. Monteith was so unequivocally associated with the programme that his absence will be very obvious, and with Lea Michele having the other starring role it remains to be seen if she will even want to come back or deal with any storyline that explains the lack of Finn. Had this happened last year it would have been relatively easy (if incredibly sad still) for writers to say that Finn had been killed in action in the Army…but at teacher training college? It would highly distasteful for Glee to try and push any anti-whatever messages into any storylines; they’ve done texting and driving, shooting and way back in the first series they even touched on drugs. 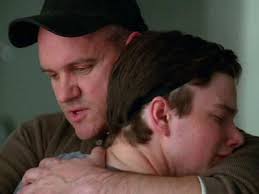 a scene from Wonder-ful

Given that an overdose was the likely cause of Monteith’s untimely passing at just 31, it may turn out that with the permission of Michele and Monteith’s family that any exit storyline remains as true to reality as possible…a bit of a distasteful suggestion maybe but something which would help highlight the dangers which may have contributed to the tragic circumstances. All of this is pure speculation of course, and it may be a question of if we see season 5 of Glee rather than when, but hopefully the show will offer fans the opportunity to grieve properly for both the actor and character.

Here is the song that helped make Monteith famous, and what ultimately became his last ever scene in the show: