Seeing as though for some reason my blog has been getting lots of traffic in the last few days (thanks mainly to this little post from last year) it seems I really need a kick up the backside to add some more content! As it happens I already had a few ideas for new posts, and here is the first…a revisit to the old faithful theme of cars and particularly one rather large Mercedes Benz.

Having been a long term fan of the Mercedes Benz R Class I was pretty disappointed to hear that it was being discontinued back in 2012. Admittedly the MPV/Crossover blend with a hint of coupe didn’t really work wonders on buyers, but given it’s potential in a market such as China I still had a little hope that the model would live on in some form, especially as it’s sister vehicles (the ML and GL) were refreshed a couple of years ago. But mourn not fans of swoopy-windowed mildly practical/sporting Mercedes, there is indeed hope that the spirit of the R-Class is still with us alive and well, in the form of one of the most striking and arguably unusual cars to grace the roads.

Similarities with the R Class? Check that window line!

Now most readers who have gotten this far will hopefully be somewhat familiar with Mercedes Benz’s rather mixed up range of cars. Without going into paragraphs and paragraphs of how the various A/C/E and LS/LK/LA alphabet soup pieces don’t make sense, I’ll just focus on what is probably one of Mercedes’ most important models of the last decade; the CLS. For around a 10 year period from the mid-90’s Mercedes had been getting themselves into a bit of a funk…the brand had lost their steadfast reputation for quality, innovation and reliability and instead had been pushed into 3rd place behind Lexus and BMW in terms of global luxury sales. Now whilst Mercedes are still struggling to climb to the top of that sales mountain again, the launch of the E-Class based CLS ‘4 door coupe’ really heralded an important return to form in terms of styling and also pushing the boundaries of vehicle niches. Although not it’s top seller by any means, the CLS remains one of the most recognisable Mercedes models and has provided inspiration for copies from other manufacturers and even a couple of mini-me’s from Benz itself.

The second generation CLS was launched back in 2011, and although a facelifted model is arriving at the end of this year I am only just starting to appreciate the huge jump made in the updated car. Of course there were the usual upgrades in terms of efficiency, quality, technology and arguably styling, but for me the biggest improvement in the new car was the 2012 introduction of the Shooting Brake model. Effectively an estate version of the standard CLS the Shooting Brake (SB) offers a whole new dimension to customers shopping in this segment of the market and in my opinion really excels at offering a unique vehicle in a marketplace extremely crowded with everything from SUV’s to strange high-riding hatchbacks (see the BMW 5 GT for example!).

Walking up to the SB and it’s hard to avoid staring – it’s a car that looks completely different from anything else in the Mercedes range let alone the marketplace. The front half of the car is admittedly identical to the 4-door CLS but this is no bad thing; LED headlights and running lights are standard and lead into a dramatically low bonnet and raked windscreen. Further back though and instead of arching down into a stubby boot, the Shooting Brake’s roofline is elongated and merges with bulging rear wheel-arches to give a muscular, squat presence. I guess the only thing that is similar on the road would be the (much more expensive) Porsche Panamera, but whilst the Porker is often compared unfavourably to a dog taking a sh*t, the CLS’s higher roofline manages to avoid looking clumsy. The sweeping window-line is also a credit to Mercedes designers and it is here where I see a lot of the aforementioned R Class; raise the body by a good few inches and with a bit more suspension travel you are looking at the successor to the big R both in terms of styling and pricing! A grand tourer if ever there was one, even the front of the facelifted R is eerily similar to that of the CLS, not a bad thing in my opinion as with a little less bulk the design seems to look alot more modern and sleek.

Looking inside and I’ll concede that things are pretty different from any R Class, but seeing as though this is a design that’s at least 5 years fresher that’s not really surprising. In terms of physical layout things are pretty conventional; there are 5 reasonably spacious seats (leather as standard of course), and although the middle perch in the rear has quite poor legroom thanks to the RWD transmission tunnel, it is at least better than being forced to have a 4 seat layout as in the 4-door CLS. Headroom is improved over the SB’s less practical sibling too as the roof doesn’t cut so low for rear passengers, and in the way back the boot is actually surprisingly large given the car’s styling; at 590L it isn’t actually too much larger than the saloon’s but it beats conventional estates like the Audi A6 Avant and BMW 5 Series Touring…if not the huge E Class Mercedes also offer. Admittedly the load space isn’t exactly very tall but it does at least beat cars like the Audi A7 in that respect too.

When it comes to ergonomics and technology, this has been a recent thorn in Mercedes’ side as rivals BMW and Audi got the jump on it with their iDrive and MMI systems respectively. However having sat in the Audi A7 and the CLS I would say that this gap is by no means as large as you’d think, and for the average consumer there is little difference unless you really intend to explore the full capabilities of the system. Let’s get the negatives out of the way first and say that Mercedes’ column layout and parking brake are still a bit of a put off (unless you’re used to driving cars from the marque that is); having the gear selector as a column shift isn’t the world’s worst idea, but it does mean that everything is controlled by one stalk on the left side of the steering wheel. With automatic wipers as standard this isn’t a deal breaker, but the fact the lever is not set at the ‘9 o clock’ position as in virtually every other car could be a problem, and having cruise controls on a stalk lower down still seems like a bit of a throw back too. Even worse though is that Mercedes are still persisting with American-style foot parking brake pedals, instead of a much simpler electronic brake that seems to have been adopted by every other luxury manufacturer! I am sure they have their reasons for these things, but the fact that the very latest MB models seem to be losing these quirks makes it frustrating that one of their £50k+ flagships is still stuck in the old way. 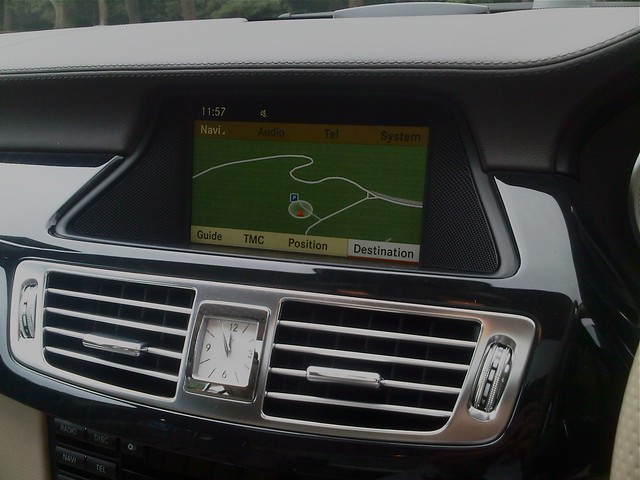 COMAND is Mercedes’ infotainment system and has been a sticky point in the past in some of their cars, but the introduction of a central control wheel and a few redundant controls around it mean that they are catching up quite rapidly. Most CLS get the full system with a 10GB HDD-based navigation displayed on a 7 inch screen (although a SD-card based system with a 5 inch display is standard on the CLS250), and of course there are plenty of posh options to bump up the price. Annoyingly even things like heated seats or even ones with memory are not standard, but there is also the potential for them to have even more electronic adjustment if needed and of course cooled(!) seats too. It’s nice to see LED headlights standard and on AMG Sport models they are adaptive too, but things like a blind spot warning system, adaptive cruise control, keyless go, sunroof and COMAND Online/Apps are of course optional. Thankfully they do throw in a powered tailgate and parking sensors for free, but a reversing camera is extra (and sort of needed…this car is nearly 5m long!). In direct comparison to rivals from BMW and Audi it’s hard to compare kits levels directly, as all offer something as standard that the others don’t, but whilst they do tend to offer more high-tech features the likelihood of buyers paying through the nose for them isn’t as likely as some reviewers might have you believe. What does matter though is design and here I was pleasantly surprised when I sat in one; I didn’t think that dark/black wood and metal accents would really appeal to me but when compared to the admittedly more high-tech Audi it came across as a lot simpler and user friendly. Of course Audi and probably BMW probably have the edge in terms of cleaness of design (and it’s annoying that blank switches seem more noticeable in the Merc too) but the CLS really has a classy and well thought out cabin which is at least competitive.

The 2.1 4-cylinder diesel under the bonnet may not be the prettiest but it is economical

In the age where diesel reigns supreme even among luxury marques it is not surprising to see that Mercedes only sees fit to offer 3 engines for the CLS in the UK…two of which are diesel and the other a turbo-charged 5.5 V8 monster in the form of the CLS63 AMG. Elsewhere in the world there is a surprisingly frugal 3.5 V6 petrol and a damn fast (if thirsty) 4.7 V8. Virtually all UK buyers will be making the choice between the CLS250 CDI (with a 2.1 4-cyl diesel) or the more traditional CLS350 CDI (with a 3.0 V6 diesel); not a whole lot seperate the cars in terms of price, performance or running costs so it really comes down to the buyer to go and test drive to see which they prefer. From what I understand the 204bhp of the CLS250 is more than adequate to ferry the car around, and whilst slightly unrefined on startup it should manage around 50mpg if driven sensibly. For about £3.5k more buyers can choose the CLS350 which has 265bhp and is powerful enough to outsprint most hot-hatches, but it loses 5-10mpg in real life driving. The CLS is by no means a sports car and so the diesels suit it’s calm character in both body-forms, but the car does handle with some modicome of sporting aspirations thanks to an adjustable drive-mode and paddle-shift in AMG Sport versions. I suspect that the 19″ wheels of most cars will result in a ride which maybe doesn’t represent Mercedes’ reputation for a soft ride in the best light, but those really worried can opt for air suspension for a relatively hefty fee.

There are some really great deals on CLS around at the moment as dealers try to shift stock before the launch of the facelifted car before the end of the year. The starting price of £52k for the CLS250 Shooting Brake may seem pretty steep when compared with the likes of the A7 and more traditional estates, but I have read of dealers hacking £10k+ off list price without any haggling at all! What is more difficult is choosing between the more affordable to run CLS250 and the effortless pace of the CLS350, especially given that speccing the full COMAND system (standard on the 350) makes the gap even narrower. Still if it were me I would probably get a debadged CLS250 and spend the difference on a few nice extras to make the car feel even more special and sit comfortably in the knowledge that I was driving one of the most eye catching and rare cars on the road.