Apologies for another long gap between posts – life has been a little hectic in the Wright household and there’s now a puppy who’s trying to munch through blankets, clothes and shoes. Add in an upcoming change in job, and I’ve had little time to think about blogging…

That said, this past week I had the perfect opportunity to gather my thoughts and actually drive a car that wasn’t my own! Admittedly it ended up costing me nearly £1,000, but still, driving something new is always a bit of an adventure.

A bit of background for you – I’ve had my 2005 BMW X5 3.0d for nearly two years now. In that time my service lights have remained intact, but given that I start a new job next week, I thought it wise that I take the opportunity to take it in while I had the chance. I wanted something difference other than the backstreet garage I used for my Astra, and had been advised on a Mercedes and German car specialist based in Hoddesdon, Hertfordshire – around 10 miles from home, or 3 miles from where I work.

I’d arranged to be given a courtesy car, my first ever, and as expected it turned out to be a Mercedes. The firm has a ‘fleet’ of two second generation A-Class models, and a Mercedes C-Class from the 1990’s. Mine was to be a silver 2005-registered A-Class…it had just under 70,000 miles on the clock, and under the bonnet was a diesel engine. I can’t confirm just which engine it was, as unbelievably I didn’t even properly check. I’d assume it was a A180 CDI which is the middle diesel option – so it should have had a 2.0-litre oil-burner with 109hp, but more on the car’s performance later.

I have never been a massive fan of the first two generations of Mercedes A-Class. In many ways it pioneered the current massive market for premium small cars, but late-90’s Mercedes being what it was, the original car was somewhat lacking in terms of everything apart from desirability and excellent packaging. The second generation car was notably better in terms of fit and finish, but it never quite attained the same level of popularity as its predecessor or emerging rivals from the likes of BMW.

The exterior of any A-Class always leaves a little to be desired, and my courtesy car was covered in stone-chips and missing a few bits of chrome trim. OK so it was just something to tide people over, but I doubt the owner of the ML63 in the car park would have been happy to receive this particular example! Elegance trim means that this was the basic version, but it did still come with fog-lights and alloy wheels – still not my cup of tea, but spruced up, this could have been attractive to certain people.

Part of the A-Class’ appeal was its interior, but I struggled to find much to like once I opened the door. The car’s unique ‘sandwich’ platform meant that the seats were mounted very high off the ground for a small car, and reminded me more of the seats in my X5 than anything else. The dashboard seemed smartly laid out, but materials were a little scratchy by modern standards, and the radio panel didn’t display much information despite it being pride of place.

However I was reasonably impressed with the central information screen in the instrument panel. It may be a step behind modern colour units, but it displayed a reasonably comprehensive set of information that beats my X5’s tiny strip of info into a cocked hat, and is actually one of the things that still makes me pine after any second generation ML models that I see parked around. 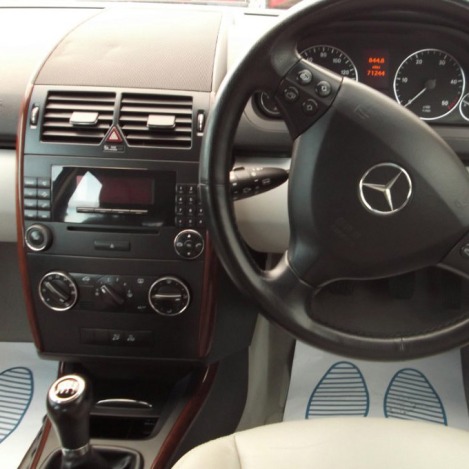 Space-wise, I’ve got to be totally honest and say that I didn’t even open the rear doors or the boot of the car, but from what I’ve been told and have experienced myself (my friend has one), they’re surprisingly practical for such a small car, but the raised seating position isn’t complimented by an especially high roof…my head kept brushing the headlining and I’m only six foot tall.

Driving the A-Class was a bit of a mixed bag as well. It was a manual car, with a six-speed gearbox that had a bit of a clunky shift. This was the first diesel manual car that I’d driven, so I was quite surprised at how well it shifted when required – I don’t often push the acceleration in my X5 and I let the gearbox do the work, but the increased torque of this car gave it a decent turn of pace.

The ride was reasonably controlled also, and steering was accurate, if not especially engaging. However my main issue with the car came down the gearbox, and specifically the unusual location of the reverse gear – it required the entire gear lever to be lifted and pulled across to where first gear was…so when I first got in the car I nearly crashed it in the yard!

I ended up having to keep the Mercedes for three days as my car took a little longer to sort than they initially thought. I was glad to hand it back, not least because the alternator was apparently on the blip and I was paranoid the car wouldn’t start. Fuel economy over this time was surprisingly poor, but then I guess this was an 11 year old car even if it was regularly serviced. My average was around 40mpg – not that great when you consider that it’s a small car with not much power. Admittedly I did drive a little heavy footed at times, but even when cruising at 50, the fuel economy never bettered 45mpg. OK so my car is currently returning around half of that, but then it’s a large 4×4 with a 3.0-litre engine.

If you’re after a practical small car that’s cheap to run and fun to drive, then my personal opinion would be not to buy an A-Class. It’s by no means a bad car, but there are noticeably cheaper rivals on the market, and others that offer a much better mix of talents than the mini-Merc. My mum’s Jazz is testament to this, and although it doesn’t come with a diesel engine, it still returns nearly 40mpg and is even more practical than the A-Class.