Despite my love for all things car, until last month I had never been to a so-called ‘experience day’, where mere mortals are allowed out to test the limits of their skills and/or the abilities of a machine. I guess it’s probably because my experience of cars has been more academic (as in reading about them) as opposed to hands on, plus, I prefer the likes of the Range Rover and Mercedes G-Wagen to Ferraris and Lamborghinis.

That said, there are a tonne of off-roading experiences out there, offering anything from 15 minutes in the mud in an old Land Rover, to a whole day climbing sand dunes in a Toyota Land Cruiser (OK the latter might only be in sunnier climes, but you get the point!). There are also several company-approved experiences, where manufacturers keen to show off just what their cars can do let you loose behind the wheel of some highly capable machinery.

It was the latter which I did last month, and as you may have guessed from the title of this post, I went to Mercedes-Benz World in Surrey…

So Surrey is a pretty big place, but fortunately Mercedes decided to set up shop right next to the historic Brooklands racing track and aerodrome – that’s close to prosperous Weybridge and not far at all from the M25, M3, M4 and A3, so access is relatively easy, and there’s a whole set of retail parks with plenty to busy yourself with if you get there too early.

However, that section of the M25 is also probably the most congested, and so the traffic isn’t necessarily going to be on your side. You’re advised to arrive 30 minutes before your start time, but realistically aim for at least an hour before to be on the safe side. If you fancy a nice detour, do what I did and accidentally go up the M3…you get back on route via some really pretty villages like Chobham and Sunningdale – worth the extra petrol. 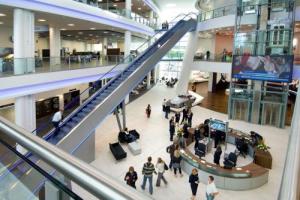 Mercedes-Benz Brooklands is more than just a tourist attraction aimed at getting you to buy a Merc, it’s also the UK’s flagship dealership and there is a museum built in as well. As such, it’s a rather imposing and futuristic building accessed by a lone road – you’re treated to views of the various racing tracks and the off-road course on either side of you, so keep an eye out. The car park is quite small, but it shouldn’t be too hard to find a space.

As long as you’ve brought your driving license and booking code with you it’s very easy to check into your experience. After telling them at the desk that you’ve arrived, somebody young and enthusiastic will come along with an iPad and some paper forms for you to sign, then you can amble on over to the ‘drivers’ lounge’ for start time whenever you see fit – I used this time to have a good nose around the museum (which isn’t that big, but has very cool classic Mercedes models), but there is a cafe as well.

So there are loads of Mercedes models that you can play with, ranging from the entry-level A-Class hatchback up to the SLS AMG Coupe, but the off-road course is limited to just one choice of vehicle, currently the recently-departed ML model.

I was not a massive fan of the third generation ML model, but I knew already that it would be the car I did the day in: the GLA is (according to my guide) surprisingly capable, but lacks the ground clearance needed for the course, the GLC is too new, and doesn’t have many fancy off-road gizmos, the GLS is also very new and very expensive, and the G-Wagen, well we’ll come back to that one.

All ML models used have the ‘250’ diesel engine – a 2.1-litre four cylinder with just 204hp, not a great amount in such a large car. They also have the off-road package (approx £5k including air suspension) and, strangely for cars which spend all-day in mud, the 20-inch AMG Sport alloy wheels that I actually quite like. There were also the updated LED-lights that perk up the car’s appearance, but they only last six months before they are replaced with a newer model, so expect to see new GLE cars going round the track soon enough.

I was actually surprised at how much I like the ML – admittedly this may have been because I was having a lot of fun, but the larger alloys and modern lighting perk up it’s appearance a lot. Add in an interior that’s roomy and well specced, plus light steering and incredible off-road abilities, and you have a school-run special that’s a lot more capable than most people would give you credit for.

You get your own personal ‘guide’ for the experience, who drives you to and from the off-road course (slowly) and also has dual control in the form of a second brake pedal…the same you’d find in a driving instructor’s car. Mine was incredibly friendly and knowledgable, and a good repore with your guide is likely to lead to a better overall experience.

Having never done a course like this before, I couldn’t honestly tell you if it was challenging or not. There were some pretty impressive manouveres that the car did, but I expect that even the standard versions of the ML would equip themselves pretty well. The off-road package does bring locking differentials and air-suspension, but the latter was only really massively useful in water and giving a slightly smoother ride over rough terrain.

Highlights included balancing the car on two rocks, and then doing the same against a massive mirror to watch how the diffs work. Then there was a pretty deep water canyon and a very steep gradient to climb (complete with water flowing down at speed), and then the crowning glory has to be the near 70-degree drop that you have to go down – my guide was actually impressed with how long I held the car on the brake, so I was pretty chuffed.

As you might expect, literally every Mercedes Benz on sale today: there’s a special AMG showroom just for those throaty models, but there’s also a large main showroom downstairs, plus plenty of private suites for those who want to buy something very expensive in a private setting.

I was a little disappointed that, despite the large amount of sales people around, that the cars were mostly kept locked. I can understand this to a certain extent, but vehicles like the GLC are not exactly haloed property, and in fact as I mentioned in my last blog post, it’s very hard to get access to one in the metal.

I’d thoroughly recommend Mercedes-Benz World to anyone who is into cars – I suspect that the track experiences are just as (if not more) fun than the off-road bits, and although it can get a little expensive, it’s still a cool way to test some powerful machines with the knowledge that it has come from a corporate dealership and not a wide boy’s shed.

That said, my guide mentioned that he had suggested a premium off-road track day with the use of a G-Wagen as the car. The G was the only Mercedes not in the showroom, and I was disappointed at that, especially in the flagship Mercedes dealership. There were a couple positioned prominently outside, but for a car that could have some real market appeal, it was curiously downplayed.

I know that I’d certainly pay the premium to use a G350d to do that course, and it’s smaller body and better off-road equipment should mean that no obstacles would stop it. If Mercedes can let people throw a £150k SLS around the track, do us a favour and let the £85k G-Wagen loose soon, please!